In the southeastern tip of the Peloponnese, with an area of ​​only 19 square kilometers and located only 570 meters from the coast of Punta beach in the area of ​​Vion, the Elafonnisos is one of the most famous tourist destinations. To the east lies Neapolis, and to the south the beautiful island of Kythira.
The name comes from deer hunting which took from antiquity to the island. According to Pausanias, there were many shrines of Artemis in the area, the protector of hunting. Specifically, the browser refers to the existence of red deer (CERVI), something which much later reflected, in the 15th century AD, from the homonymous Venetian name of the island.
This name is reflected also at the village opposite from the island Viglafia (VIGKLA -ELAFIA or Deer in Greek) .After a Greek-English conflict, the island finally came to Greek occupation in 1850.
Elafonisos is famous for its beautiful beaches with the beach of Simos standing out, with the emerald color of the water of the sea and the white gold sand. On the south side of the island, opposite the island of Kythira, the beach enchants the visitor with its fabulous beauty.
Other equally beautiful beaches to enjoy swimming in are Lefki, Punta, Kalogiras and Panagitsa. The island is famous for its fish taverns serving fresh fish, having a wide variety seafood..
With just a few hundred inhabitants in winter, the island is flooded with tourists in the summer, peaking in July and August. 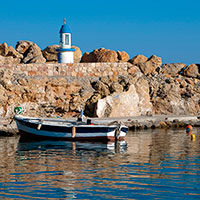 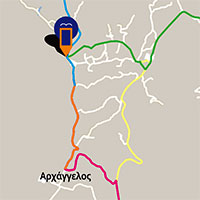 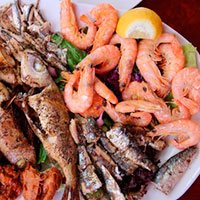